In anticipation of a post-2020, second period Energy Efficiency Obligation Scheme (EEOS) to be installed by the government, this paper reviews the effectiveness of the scheme’s first period 2015-2020, as well as the experience made by obliged parties (OP) to comply with it.

The first chapter of this paper is dedicated to feedback this experience of OP and wishes to provide critical design elements that help to improve the scheme’s effectiveness in the post-2020 period. The second chapter proposes measures on how to promote energy efficiency by dynamising the energy market. The third chapter develops some essential thoughts to consider when applying EEOS to road fuel in Luxembourg.

2. Lessons learned from the first period of EEOS in Luxembourg

Table 1 lists ten significant observations made by obliged parties (OPs) during the first period of the scheme and opposes them to propositions that may help to improve the scheme in these points in a second period. All observations and improvement proposals are described in more detail in the following paragraphs.

Points 1 & 2, Table 1: The success of Luxembourg’s EEOS in terms of realised energy savings versus targets during the first period must be considered moderate to low. One of the reasons might be the relatively high savings targets set for OPs to cope with in the initial period. According to a recent good practice study by the European Bank for Reconstruction and Development[1], the most successful EEOS in the EU were the ones that allowed OPs to gather enough experience with operating under an EEOS in their first period. Their approach favoured setting relatively low targets in the initial period. Targets were then gradually increased. This paper therefore strongly advocates to follow such a gradual approach for the second period in case new, and so far, unexperienced Obliged Parties will be included in the scheme. This can be done, for example, by subdividing the period into phases with increasing sub-targets.

Furthermore, to determine the due savings volumes for the second period, OPs suggest aligning savings targets with the realistically available EE potentials that can be realised cost-effectively and considering OPs’ market share. The cost-effectiveness of EE efforts tends to decrease as EE programs mature because EE marginal costs grow the more extended such programs run. Marginal costs can be limited if (1) overly ambitious EE savings targets are avoided, and if (2) OPs are mandated to focus on reducing the energy consumption within their portfolio of energy products only. For example, it is not considered cost-effective to oblige an electricity and gas provider to reduce consumptions of traditional road fuels or vice versa.

Point 3, Table 1: Obliged Parties (OPs) confirmed that corporate clients much appreciated the synergetic effect that FEDIL’s Voluntary Agreement has when it comes to realising EE potentials in the framework of EEOS. The second period of EEOS must, therefore, make sure to conserve this positive leverage between the two EE instruments. 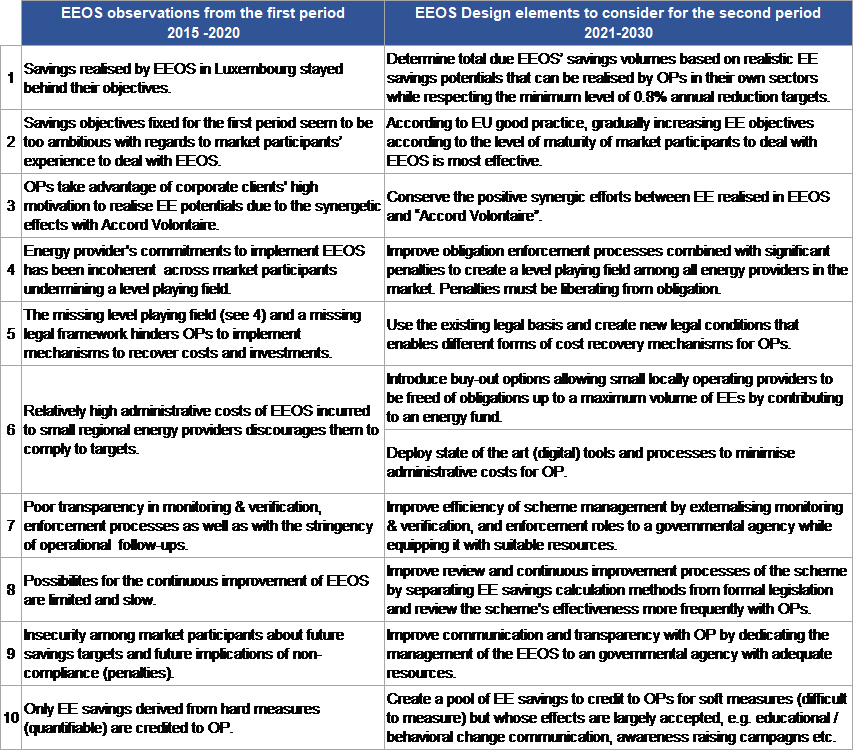 Table 1: Major observations made by Obliged Parties (OPs) during the first period of EEOS and proposals for scheme design improvement in the second period

Point 4, 5, 6, and 7, Table 1: During the first period of the EEOS, not all obliged energy providers complied coherently to their duty of reducing energy consumptions at consumers. While some energy providers invested in developing expertise, methods and tools to comply with their obligations, others went as far as ignoring them altogether. This incoherence across market participants to broadly comply with the EEOS undermines the level playing field of the OPs’ markets. Energy providers that generate costs to comply with the EEOS obligations must now compete with other OPs who prefer to pay a low penalty fee while betting on indulgent enforcement processes by the administration. This situation provides an unfair competitive advantage to non-complying OPs, and at the same time, it hinders complying OPs from forwarding their additional costs to consumers.

To re-establish a level playing field, it is therefore essential that the administration improves the effectiveness of enforcement processes. Externalising the management of the scheme to a well-equipped government agency might be an elegant way to improve the scheme’s effectiveness of enforcement- and other processes. At the same time, the legislator must redesign sanctions or penalties for non-compliance so that they can no longer be ignored by market participants who prefer to pay the penalty rather than to comply. Today’s penalties, unfortunately, incentive some market participants to choose penalties over compliance. Such market participants, however, may have an apparent reason for their choice: They often cannot afford to invest in structures that handle the EEOS: Due to a relatively small market share, their business model does not permit the related overhead costs. This situation is due to a significant design flaw of the current EEOS that not only undermines a level playing field but also pushes small market participants into non-compliance.

This paper proposes four elements that can tackle the EEOS’ design flaw mentioned above:

By using the collected buy-out fees within the EE sector, the liberated providers, who today, often do not contribute at all to EEOS savings, can contribute indirectly. This, again, increases the effectiveness of the scheme.

There is a further design element to consider with penalties: for a given EEOS period, once a minimum level of EE versus target has been realised by an OP, for example, 85%, the following two elements would become eligible:

Such a design element takes into account the increasing marginal costs of energy efficiency and focuses the OP’s efforts on the most cost-effective EE measures first. At the same time, it generates funds to redistribute to those OPs who have the expertise and tools but ultimately shy away due to the high costs involved with harnessing the full potential of EEs.

Furthermore, the collected funds may also be used by the scheme’s administration to launch call for tenders among energy users to realise untapped energy efficiencies (EEs) in their systems, either on their own or via the help of an external energy expert. The winner of the call could access to funds to finance the realisation of his EE potentials.

Point 9, Table 1: OPs wish for more transparent communication and exchange about how to improve the design of the scheme for the second period, for example, via collaborative working groups and more regular dialogue. Similarly, as described in Point 7 of Table 1, leaving this part to a governmental agency, fitted with adequate expertise and resources could significantly improve such a dialogue.

Point 10, Table 1: The current EEOS only credits OP for EE savings whose effects are directly measurable and quantifiable. While this approach is perfectly valid, it would undoubtedly have a leveraging effect to also allocate virtual savings units for measures that are not quantifiable but equally essential for EE savings, e.g. educational and behavioural changing communication, awareness-raising campaigns, etc. The legislator could motivate each OP to increase such measures by reserving a pool with EE savings credits to be allocated upon completion of such specific soft measures.

Industrial companies would welcome to see higher market dynamics in the electricity and gas supply sector in Luxembourg. Indeed, the competitive situation among local energy suppliers is characterised by an unevenly balanced small portfolio of market participants.  On a long-term basis, this situation may represent a significant source of uncertainty for energy sourcing strategies of large industrial consumers. This is true not only for sourcing strategies but also for the realisation of EE potentials that companies can realise within the context of the Energy Efficiency Obligations Schemes (EEOS). It is again the small number of energy providers with unevenly balanced relative market share and EEOS competence limiting the available EEOS offer that industrial energy consumers can refer to..

This paper suggests considering the two following points to remedy this market situation:

An effort to dynamise the EE market is therefore also necessary here: The number of contributing players in the EEOS must be significantly increased. One possibility to do so is by the introduction of EE certificates. These certificates, issued by the scheme’s administration, can be acquired by third parties, such as engineering firms or energy consultants, by realising EEs based on predefined measures. They can then sell those certificates to OPs. EEOS with limited tradable certificates, between third parties and OPs, have been applied successfully in Denmark, in Ireland and the UK. Fully opened trading of certificates, such as in Italy is not recommended, as they add much complexity to the scheme and may even open paths for speculation with EE certificates.

4. Implications of applying EEOS to road fuel in Luxembourg

Knowing that road fuels account for the lion’s share of Luxembourg’s energy consumption, it seems tempting to include the road transport sector in the EEOS and appointing traditional road fuel providers as a further obliged party (OP). Indeed, according to Statec, in 2017, road fuels sold in Luxembourg made-up for 58% of the total final energy consumption, representing almost 66% of national CO2 emissions. A closer look at these numbers, however, reveals that from all the transport fuel sold in 2017, only 23% are consumed by residents while 77% are sold to non-residential drivers. It is this very ratio, between fuel consumed by residents versus non-residence that has non-trivial implications when including the road transport sector in the EEOS.

A uniform application of the scheme to road transport would require OPs to apply nationally defined measures to find EE potentials that are nowhere to be found on national territory. As most of the savings’ potential (77%) is consumed outside of national borders, the measures defined for Luxembourg do not apply, and cannot yield any energy savings.

One might now tend to argue that fuel consumption can nonetheless be reduced by gradually increasing fuel prices in Luxembourg. Again, implications are not so straight forward: Firstly, increasing fuel prices does not reduce fuel consumption; it merely shifts it towards other markets. Such a shift inflicts significant income losses to Luxembourg without producing any benefits for climate change mitigation. Secondly, a fuel consumption reduction that originates from a price increase cannot be claimed by obliged parties (OP), because the reduction does not originate from their action but from a fiscal one. Worse even, such reductions may be considered by OPs as a lost overall savings potential they could have realised.

4.2 Implications for the design of EEOS in the road fuel sector

There are many successful examples of EEOS schemes for traditional energy utilities in the EU. Their success is however based on factors that may be hard to transpose to the road fuel sector. Most EEOS address energy efficiency improvement targets via distributors, retailers or service companies who have strong relationships with their energy customers. These relationships are then used to offer services, incentives or projects to improve energy efficiency. In the case of electricity and gas utility companies, there are even “hard” wired or piped connections with their customers, supplying energy in a continuous manner. Such a strong customer relationship does not only allow them to more directly influence their customer’s consumption patterns, it also allows them to precisely measure the EE gains they can account for. Customer relationships offering the possibility to directly promote EE and accurately measuring them hardly exist for road fuel supplies in general. This situation makes the application of EEOS to road fuels more difficult and less cost effective in terms of implementation.

Furthermore, the design of an EEOS scheme for road fuels calls for an adaptation of Luxembourg’s regulated price scheme for fuel products, as fuel suppliers need options to recover the additional costs related to their EEOS efforts. Such an adaptation must be done in a way that the EEOS will not result in a source for distortion of competition.

As a result, it is safe to assume that an EEOS scheme may not be the most effective instrument to address EE in the road fuel sector. There are many other proven ways to promote energy savings in this sector, such as vehicle efficiency standards, labelling, taxation of road fuels, or measures to improve transport infrastructure.