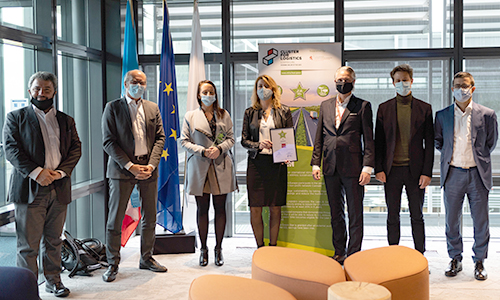 LEAN & GREEN is an international program to reduce CO2 emissions, promoted in Luxembourg by the Cluster for Logistics (C4L) since 2014 in collaboration with the Ministry of Mobility and Public Works. The label is encouraging companies with logistics activities or real estate activities to move to a higher level of sustainability. lux-Airport participates in the LEAN and GREEN program and therefore committed to achieve a 20% reduction of its carbon footprint within five years. In just three years, between 2016 and 2019, lux-Airport realized 26% reduction of its relative carbon emissions (emissions compared to the number of passengers and freight’s tones), and thus received its first Lean and Green star.
Several key steps contributed to this significant result in the reduction, whereas three main points are:

Setpoints adjustment to the needs

Optimization of the terminal’s energy regulation

Thanks to the centralized automaton that controls and manages the programming of heating, cooling, and electricity based on information from the meters of the terminal, new optimization measures have been implemented, such as reducing the operating hours of the ventilation units and reducing the temperature at night. In addition, the existing lights have gradually been replaced by LEDs where possible.

Investment in an electric fleet

2019 lux-Airport increased its fleet of electric vehicles to seven cars. The right choice since lux-Airport only uses green hydroelectric energy.
However, there is a lot more to come on the environmental action plan at lux-Airport, and the 2nd lean and Green star is the objective in the years to come. lux-Airport’s efforts will be focusing on the old building’s energy optimization – reinforcement of the insulation, change of oil heating systems to more environmentally friendly systems, and continuing the energy optimization of Terminal A via a set of 40 measures already identified.

lux-Airport environmental policy, on which management is fully committed, is being refined as part of continuous improvement to achieve objectives that are ever more ambitious. The final objective is the carbon neutrality in 2050, which will be achieved by reducing lux-Airport’s energy consumption by 50% in 2030 and producing or using only renewable energy for its own needs.

François Bausch, Minister of Mobility and Public Works, considers that “This labeling of the Luxembourg airport operator constitutes an important step in the continuous greening of transport and logistics activities supported by the Government at European and Luxembourg level. lux-Airport is the second operator of a European airport with the Lean and Green label and joins a growing community of nine European countries committed to a more sustainable economic future. ”

lux-Airport press service:
If you have any questions, please contact Rebecca Pecnik-Welsch at (+352) 24 64 23 02 or by e-mail:rebecca.pecnik@lux-airport.lu.